You know…those words that saying or hearing make you shudder (and I’m not talking about swear words). Maybe you don’t think you have them, but if you think about it long enough I bet you’ll come up with a few.

Some people despise the word “moist.” Don’t ask me why, I’m not one of those people. I don’t like saying the word “cookie.” I love what said word ultimately stands for, but there’s something about saying it that makes me mentally grimace. I think it’s the two hard “kuh” sounds in such a short timeframe, but who knows.

Then there are words that you don’t like because of an implied meaning that you maybe don’t want implied. For example, when people ask me about what my “accident” was or when my “accident” happened, I’ll respond by talking about my injury or when I was injured. It’s not that I take issue with calling what happened to me an accident, I just feel that “injury” fits better. Another example, if you go to Starbucks and order a medium latte, the barista is supposed to respond by clarifying that you want a grande latte since that’s the “lingo of Starbucks.” I probably shouldn’t admit that I know that…Yes, it’s the exact same size and thing, so does it make a difference? Probably not. Yet, as likely everyone has experienced, words are powerful things.

What’s another one of my strange “meaning-is-implied-in-not-quite-the-right-way” word aversions?
Busy. The word busy.

How are you? Good, I’ve been pretty busy.
Do you want to grab a cup of coffee? I can’t, I’m busy.
What has so-and-so been up to? I don’t know, they’re always so busy.

When you ask Google for the definition of busy, it’s about as simple as it gets.
Busy (adj) having a great deal to do.
Busy (verb) keeping occupied.

It’s a simple 4-letter word, and yet so often, so much is implied and assumed with its use — that implication that someone has too much going on and is simply too busy to be bothered by you. That’s sad right? Especially because that isn’t always what’s meant when someone says they’re busy.

I’ve been google’s version of busy the past few weeks  (meaning having plenty of things to do and keeping myself occupied). If you ask anyone in my family, that’s really the best (if not only) way for me to be, otherwise my bored mind goes into overdrive and I just get into a lot of trouble…

For example, I interviewed down in Chicago for an MD/PhD program the end of September then came back home and worked for a couple of days. I left at the end of the following week for an MD interview in southeastern MN, came home and then left for Chicago again the next day with the sisters for an epic early Christmas present to see Hamilton (it was ridiculously amazing). I worked a couple more days and left one more time for Minneapolis with the older sis in order to race the Twin Cities Marathon this past weekend. 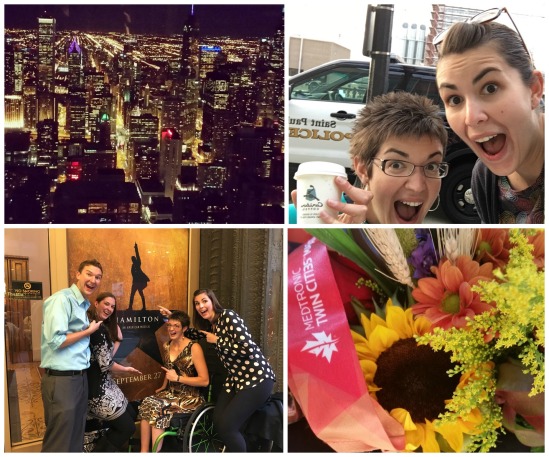 Needless to say, I’m pretty grateful that I have minimal plans for this week and can sit and enjoy a delicious latte at a cute little local coffee shop and watch the world spin at a more nonchalant pace.

So yes, I’ve had lots of things to do and have been plenty occupied the past few weeks, but I really don’t like saying I’m busy. Despite those “big events,” I still was able to meet up with some great friends, read some intriguing books, volunteer, and a whole menagerie of other random things (most of which I truly enjoy doing).

You know, I’ve come to realize that we all have the same 24 hours to spend in a day. Of course I’ve “known” that for, well, a long time and yet, I don’t think I really understood what that meant. No one is gifted 26 hours today or shorted 18 hours yesterday. Our daily time clocks are a level playing field. The difference becomes apparent in how, why, and what we’re doing while those seconds, minutes, and hours pass.

I don’t think there’s an inherently right or wrong way to spend one’s time. However it is a choice, and maybe one of the most important choices we all make. Do you want to invest your time into this or that friendship, or none at all?  Do you really want to spend 6ish hours a week on a roller (like a treadmill) or on the road training to race in a marathon just for fun? Do you want to go back to school for 8+ years to become a physician scientist? Is it worth it?

My answers to those questions are probably different than your answers and you know, my answers today are likely going to be different to answers I would give a year from now. Actually, I know those answers are going to be different because I have officially been accepted into medical school in a remarkable MD/PhD Program 😀 Ah! I haven’t made an official decision about attending there or not, but it is an amazing school that will certainly be hard to pass up regardless of if anything else comes my way.

I guess I’m saying all these things to really just remind myself of this time and these moments where I know being “too busy” is, in some ways, a choice. I’m sure as I go forward into my years of schooling and farther forward into a career, there will be lots of things to “keep myself occupied” and I’ll have to make a lot of choices. Some choices may not always be the most enjoyable and sometimes I probably will have to “forfeit” fun and social events for books and libraries. But I think “sometimes” is the most important word in that sentence.

Time is a remarkably precious commodity and it’s one (at least on a day-by-day basis) that we all get the same amount of.

Making the most of that time…
whether that means having plenty to do and staying occupied
or simply watching the world turn
…is and always will be up to you.