I don’t think that’s a statement that would shock very many people, but I feel as though it needed to be said. I also think there’s something about this summer, specifically, that makes it even more awesome. Perhaps it’s the sharp contrast between school year responsibilities and summer obligations. Maybe it’s the realization this summer is in essence, my last (most likely, ever) “between school years” summer. Then again, it could be that I now find myself in this remarkable position of living in a bustling city I’ve come to know and love with a close community of peers (who have become treasured friends) only a text and short walk away.

It’s awfully exciting to say the least, although I guess I should clarify that I am actually doing something this summer and not just spending it on the patio reading various books (although that tends to be my typical weekend activity). My day-to-day is usually spent at school in lab where I’m in the process of deciding exactly which lab I’d like to join for pursuing my PhD. I’m really loving it and am becoming increasingly enraptured by the science I’ve been able to learn and experience. I’m likewise pretty thrilled by my ability (at this stage in the game) to leave lab at a relatively “normal” time and actually leave lab – meaning I don’t have to go home and study for hours on end. 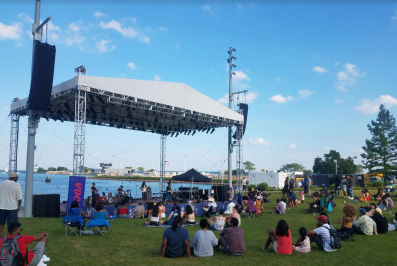 So where does that leave me? Well, it leaves me with a lot more free time than I’m used to having. Relatedly, it also leaves me with a greater appreciation for said free time. Time to explore various neighborhoods. Time to attend a small share of the countless live music fests that happen throughout the summer here in Chicago. Time to drink a beer on the patio with a close friend or group of friends. Time to stop, reflect, and muse.

Muse. I’ve been doing a lot more of that recently. You know, that unique type of calm and contemplative thinking that only happens in the arena of an untroubled and easygoing existence. That type of thinking where you aren’t really trying to answer a particular question and have little (if any) interest in reaching some extensive and esoteric conclusion. Instead, you’re just thinking, well, I guess you’re musing — about life, about experiences, about the way things are, and about the way things aren’t.

Momentary muse: The power of words.

It’s beautiful right? The ability to communicate with another being, sharing one’s own thoughts and opinions conceived in an otherwise hidden sector of your person. The ability to tell another of that thing you did for the first time or this crazy experience that just happened and you can’t believe. It’s so great – both satisfying and fulfilling — to share those things. Words allow that to happen.

I think one of the most curious aspects of the power of words is the way they so often take on a life of their own. I guess it reminds me of the classic childhood game of telephone. You think you heard one thing from your friend who heard that from her friend who heard it from HIS friend and well… you know the punchline. Other times, it’s as though someone’s words, written or spoken, hit you with such a force – maybe of realization, of shock, of wonder, maybe even disbelief — that you have to pause to ensure nothing actually happened to you physically.

It amazes me that something that appears so inconsequential and perhaps even “abstract” as words can have that kind of effect. After all, when crafted together in a particular way, words allow for the formation of relationships, the development of perseverance, and conceivably the creation of dreams. Sure, it sounds a tad ridiculous, but tell me it isn’t accurate. And yet, in the hands of a person with different intentions, the very opposite — broken friendships, feelings of failure, the crushing of hope — could also be the product of a particular arrangement of consonants and vowels.

Why does that matter? Why should anyone care? Why am I still writing this strange “stream of consciousness” blog about something as random as words?

Because words are something we use every single day — to tell a joke, make a point in a heated argument, to teach another — and rarely perceive our role and our decision to say (or not say) something to another person and the influence that choice may have. In this crazy world that we live in, so consumed by fear and angst, plot lines of anger and disgust — we all have the opportunity to play a role in how the show progresses and curtain falls.

Build up. Break down. Words do both.
We each have the power to do both.
Resolve to do only one.